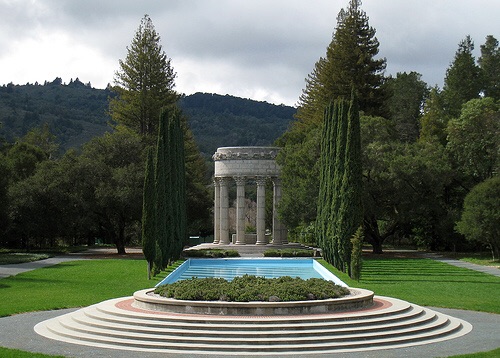 The Pulgas water temple is located in Woodside, near the Crystal Springs Reservoir and one mile north of the Filoli estate.   It was built in 1934 to celebrate the completion of the Hetch Hetchy pipeline, and represents the terminus of the pipeline.   The Temple closely resembles an earlier structure, the 1910 Sunol Water Temple, designed by architect Willis Polk, who was himself inspired by the Roman Vesta Temple in Tivoli, built in the early first century.

The Vesta Temple in Tivoli

All three temples are monuments to aquaducts.

The Pulgas Temple is also a monument to a grand project, bringing fresh water from the Sierra Nevada Mountains over 167 miles to the Bay area. The project included a major dam (O’Shaughnessy), tunnel, hydraulic plants, $100 million, and took 24 years to complete. The project began with the 1906 earthquake and fire, an alarmed populace, an act of Congress (the Raker Act), and public desire to rid itself of a hated private water system. It pitted John Muir and the Sierra Club against Progressive Mayor John Phelan and fire-scarred citizens. It ended with a dammed Tuolome River, a flooded Hetch Hetchy Valley, and a broken-hearted John Muir.

Etched on the Pulgas Temple is this quote from Isaiah:

“I give waters in the wilderness and rivers in the desert, to give drink to my people,”

Interpretive boards warn against the nearby endangered pants, birds, and animals. Ironically they do not allude to the loss of habitat caused by the massive water project that ends at the Pulgas Temple. 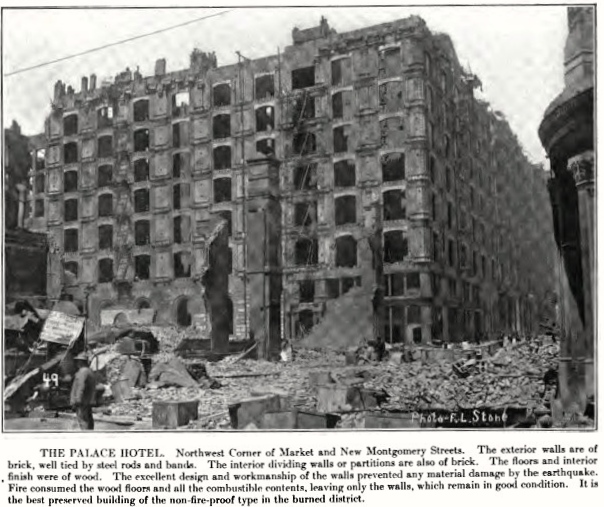 Visitors to the Bay area are curious about, if not fearful of earthquakes. They have seen pictures of earthquake aftermath, understand that another quake is inevitable, and want to know how Bay area natives live with this threat.

I usually reply with an old saying, “earthquakes don’t kill people; buildings do”.

Major quakes in 1868, 1906 and 1989 tested building techniques in the Bay area. Each failure has produced corresponding remedies. These remedies form the basis for building practices and seismic safety codes in widespread use today.

The 1868 earthquake, centered in Hayward, registered 6.8 on the Richter scale and shook for 1 minute. Buildings on landfill were the hardest hit. The best performing buildings were bolted to their foundations and/or had internal bracing. Reports following the earthquake publicized these successes, though building codes did not change. Since San Francisco was also subjected to devastating fires, many new buildings were constructed of fire retardant materials such as brick or cement.

In 1884 San Francisco engineer Ernest Ransome invented and patented reinforced concrete. Ransome added twisted iron rods to poured concrete to increase its strength. His Alvord Lake Bridge in Golden Gate Park (1889) was the first bridge in North America made of reinforced concrete. By 1894 Stanford University used reinforced concrete in several of its buildings, including the Junior Museum. Ransome’s methods became more widely used after fire and earthquake proved they worked.

The 1906 earthquake in San Francisco registered 7.8 on the Richter scale and killed an estimated 3,000 people. One fatality, fire chief Dennis Sullivan, died from his injuries when a chimney fell on the firehouse. With the failure of the water mains, fires consumed the city and 250,000 persons became homeless.

Those structures that withstood the 1906 earthquake featured steel or iron frames or bracings. The Palace Hotel, for example, was constructed to be “earthquake resistant”. Its structure contained multiple crosswalls, belted with iron, and strengthened with cement mortar. (It survived the earthquake but, unfortunately, suffered massive damage in the fire that followed.)

In 1925 John Blume experienced a severe earthquake in Santa Barbara, and vowed to look for solutions to poor construction. In the 1930’s he was a young student at Stanford University studying earthquake engineering. Blume rejected the theory of static buildings and advocated “dynamic” building, stressing design and materials with flexibility and ductility. With the help of Professor Lydik Jacobsen, Blume constructed a shaking machine to simulate an earthquake and its effect on various landforms and buildings. He tested replica buildings for inertia, ductility, resilience and strength. He promoted the use of materials and techniques to allow a building to move in an earthquake. Blume’s work led to his reputation as “the father of modern earthquake engineering”. 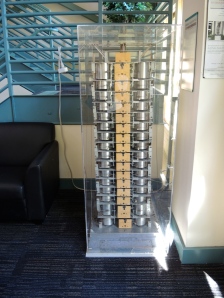 The Alexander Model is Blume’s replica of a 16-story building and allows 5 degrees of movement in all directions without damage. Blume used this model to test various seismic conditions. Today the Alexander Model is on display at the Blume Earthquake Engineering Center at Stanford.

New techniques in earthquake design allow for movement, intentional break points, and flexible utilities. San Francisco’s City Hall sits on a moat and a basement of shock absorbers. These “base isolators” allow the whole structure to move as a unit in an earthquake.

One of the most recent examples of cutting edge earthquake design in San Francisco is the Exploratorium Museum. In 2013 the Museum opened at its new Pier 15 location. The architects of the new museum exposed the flexible

utilities inside in long, looping cables, and designed a prominent (300 foot long) “seismic joint” which attaches the pier to the bulkhead. This joint will allow the pier and the wharf to move without damaging each other.Among these successes are still some cautionary notes. Many vintage buildings in San Francisco have first stories that are considered “soft”. These buildings are vulnerable to collapse in the

next big earthquake. Yes, they urgently need retrofitting but at what cost? Landlords and homeowners risk property and even life by delaying improvements.

Earthquakes are a feature of the Bay area, but the dangers of earthquakes can be mitigated with good design. So if you are a visitor to the Bay area and you experience an earthquake, my advice is to step inside a new building for shelter and safety.

“Chinese Whispers” is a local research and storytelling project dedicated to recording the history of the Chinese in the Bay area. Currently they have teamed with the National Park Service to tell the story of the Chinese shrimp-fishing industry of the late 19-early 20th centuries. Saturday, I drove to Richmond for the kick-off event, a visit to the Grace Quan Chinese junk.

The Grace Quan is a replica Chinese junk, built in 2003 using traditional techniques and materials. Today it is part of the San Francisco National Maritime Museum collection, and is berthed at Hyde Street Pier and China Camp in Marin. China Camp (also called Point San Pedro) was once one of 26 shrimping villages around the Bay including Hunter’s Point, Rincon Point, Petaluma Flats, and Redwood City. Between 1870 and 1930 as many as 30 Chinese junks like the Grace Quan frequented the bay, and harvested shrimp using fine bag nets imported from China. The fishermen collected the shrimp, boiled the shrimp, dried the shrimp, crushed the shrimp, and winnowed the shrimp, exporting 90% of the product to China. One account estimates 1,000,000 pound of shrimp catch exported in 1888, to 3,000,000 pounds in 1929.

The design of the Grace Quan illustrates the skill and ingenuity of the Chinese. It’s a compact vessel, 43 feet long, with multiple watertight bulkheads for storage, safety, and sturdiness. Its open deck provides workspace. Its fenestrated rudder allows for easier steerage. The fan-shaped sail is fully battened, spreading stress points over a wide area. With the wind it can travel at 8 knots. With no wind, a long sculling oar (yuloh) propels the craft. The junk’s recognizable sail has an orange tint which comes from the practice of soaking it in dried tanbark oak chips to protect it against mold, mildew, and rot.

Unfortunately the success of the Chinese shrimping business also led to its decline. Overfishing and discriminatory laws against the Chinese are part of this story:

Over time, changes in the composition and water flow of the Bay affected the shrimp population. The Chinese were blamed, sometimes unfairly. Hydraulic mining added silt and mercury to the water. The city dredged the bay for ship channels, added bridges and hardscape, diked and drained wetlands, and created new dams and diversions. Eventually the Chinese turned to other occupations leaving only a few remaining shrimp fisherman including Frank Quan’s grandfather Quan Hung Quock. With newly designed trawl nets, he and his sons continued the shrimp business in China Camp, processing as much as 5,000 pounds per day.

Eadweard Muybridge (1830-1904), photographer, inventor, and artist settled in San Francisco in 1866. He soon established a freelance business photographing landscapes of the west, such as Yosemite, and accepting commissions to document the homes and possessions of the wealthy.

Later (1872-1882) Muybridge collaborated with Leland Stanford, photographing Stanford’s trotting horses at his farm in Palo Alto. Financed by Stanford’s money and motivated to find the answer to the question, “do all 4 hooves of the horse leave the ground at a gallop?” Muybridge used multiple cameras to take sequential photos of a galloping horse. His success at taking the multiple shots and projecting them onto a screen with his invention, the zoopraxiscope, was the beginning of motion pictures.

Curiously, this innovative career might have been derailed. In 1874 Muybridge discovered that his wife was having an affair.   He traveled to the gold country to confront the man, and killed him. A sensational trial followed, adding to Muybridge’s celebrity and resulting in a controversial “justifiable homicide” verdict.

Had Muybridge been imprisoned, we might not have his legacy of photographs and motion studies today. Nor would Muybridge have visited Thomas Edison and shown him the zoopraxiscope.

Today you can find evidence of Muybridge throughout the Bay area.

In 1878 Muybridge took a series of photos of the growing city from the Mark Hopkins mansion on Nob Hill, resulting in a clear and detailed image over 17 feet long. Today sections of this photo are on display at the Wells Fargo Museum, 420 Montgomery St. Typically, Muybridge added clouds to his photos (early photoshopping) for atmospheric effects. 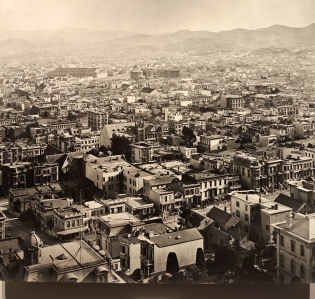 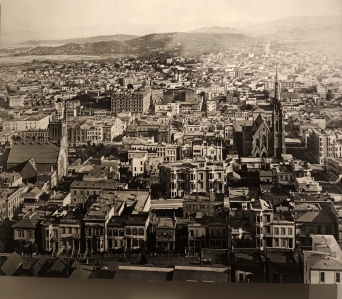 Muybridge used a wet plate process for his photography, developing his pictures immediately on site.

This bronze statue of Eadweard Muybridge is located behind George Lucas’s Digital Arts Center in the Presidio and shows him with his camera.

This historical marker on the Stanford campus is near the stables where Stanford kept his trotting horses and the track where Muybridge set up his sequential cameras.

Clarion Alley in the Mission District is well known for its colorful and polemical murals. Here one can find a mobile recalling Eadweard Muybridge and hls zoopraxiscope.