Located near The Spire

On Saturday, November 15, I visited the Pigeon Point Lighthouse 50 miles south of San Francisco and 30 miles north of Santa Cruz. It was the 142nd anniversary of the lighthouse, one of the tallest in the United States.

Sea lions, whales and birds frequent this area. But the rocks are treacherous. In 1853 the clipper ship Carrier Pigeon ran aground here in a heavy fog. No lives were lost, but the ship was destroyed. When word of the wreck reached San Francisco, reports called the site, “Carrier Pigeon Point”. Later this was shortened to Pigeon Point.

From 1852 to 1910 the United States Lighthouse Board built and maintained all lighthouses in the US. It built the Pigeon Point Lighthouse in 1872 and installed a First Order Fresnel Lens in the tower. When lit, the beam reached as far as 24 miles out to sea. Both the beam and an accompanying fog signal were unique to the lighthouse so that ships could identify their location as Pigeon Point. In 1972 a fully automated rotating aero-beacon replaced the Fresnel Lens. 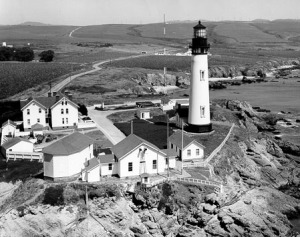 The lighthouse has been closed to the public since 2001, when a rusting section of cornice fell from the tower. In 2011 the Fresnel Lens was carefully disassembled, removed from the tower, and reassembled in the nearby Fog Signal house for safekeeping. State Park officials are now trying to raise $9 million to restore and repair the lighthouse. Once restored, the Fresnel Lens will return to its rightful place in the tower.

Every November the State Park Service hosts an anniversary celebration at Pigeon Point. The event includes an open house, docent-led tours, educational displays, and live music.  The Fresnel Lens, on display, is a highlight–16 feet high, weighing 4 tons, its 1008 prisms and lenses casting rainbows through the room.

25th Anniversary of the “Fall of the Wall.”

Looking down Clarion Alley from Mission Street I see colorful painted surfaces everywhere, even on the asphalt. Since 1992 artists and craftsmen have enlivened the space with social, political, and cultural messages that express their point of view or showcase the community. Cartoons, caricatures, portraits and written commentary fill the walls. Artists rework the surfaces in this alley continually. Every time I visit, I see new murals.

One stretch of wall stands out for its stark simplicity and its black and white palette. This mural, painted in 1994, was the last work of Jesus “Chuy” Campusano (died 1997). Called “La Raza” it is inspired by Picasso’s masterpiece “Guernica”.  True to the community, it is about the Chicano struggle for civil rights and dignity, leading to the United Farmworkers movement and continuing today.

Campusano was an artist who studied at the Academy of San Carlos in Mexico City (where Diego Rivera studied) and learned the techniques of master muralists.  He was greatly influenced by other Mexican muralists, especially the 3 known as “Los Muralistos Mexicanos”: Diego Rivera, David Siquieros and Jose Clemente Orozco.

In 1974 Campusano was invited to paint the interior of the Bank of America Building at 23rd and Mission along with Luis Cortazar and Michael Rios. The result is a 90 foot long mural depicting the challenges and progress in the local community. Other commissions included the Daly City Library, the exterior wall of the Lilli Ann Building at 17th and Harrison, and parts of the Horizons Unlimited mural (now lost). In 1970 he cofounded the Galeria de la Raza in the Mission. 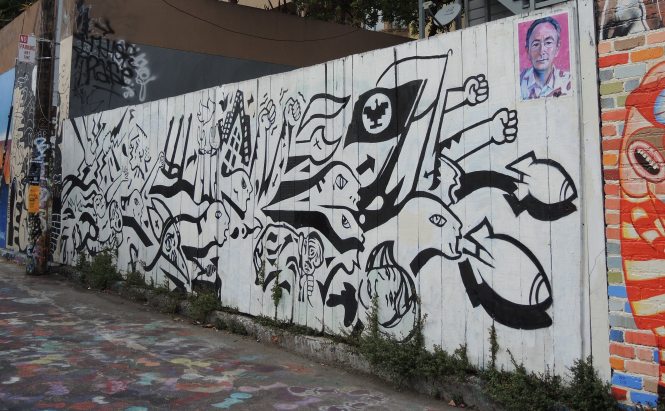 “La Raza” is painted on a whitewashed fence. It reads from left to right, a jumble of forms, characters, and arms. Looking at one recurring image in particular, the arms, note the progression:

Other images add to the story:

Like Guernica, this mural mixes imagery; forms attach to adjacent imagery implying multiple interpretations, depending on how one looks at the work. The stylistic elements (jagged edges, arrows, bomb imagery) and coloring resemble Picasso, but Campusano tells his own story, rooted in the Mission and Chicano Community.

A picture of Campusano is tacked up at the upper right corner of the mural.  Nearby Jet Martinez’s surrealistic landscape offers a glimpse at an elongated La Raza in the body of an outlined figure.